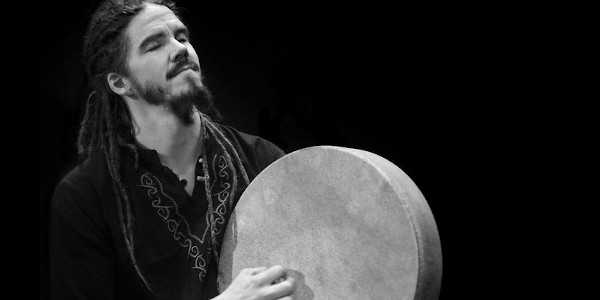 Kjell Braaten started his search for the origin of music in the mid-nineties. Around the millennium- change, his focus went more on Norse music traditions and their roots. Out of this, the band Ehwaz came to life in 1999. Later, he has participated in numerous projects that draw inspiration from the ancient music of the north.

In the last twenty years, his primary focus has stayed here, both musically and in his lecturing in old Norse music history.

Kjell started composing his own music at an early age. At the age of seventeen, he was a certified conductor and worked as a music instructor. When he turned twenty-one, he finished his education as a sound engineer and music producer. Since his debut with the project Origami Galaktika back in 1995, he has participated in more than eighty releases and worked with many projects and genres worldwide. He has also composed music for several movies and plays and produced albums for many other artists.

Kjell finds his inspiration from Mother Earth’s wonders and spends much time in Nordic nature. He does not try to reconstruct the music performed in ancient times, as that music is long gone. He seeks inspiration from the same views, sounds, and fumes surrounding those living there a thousand years ago and more. He also draws inspiration from what we know about them. He finds the sounds of their instruments and the fragments of documentation about them inspiring and fascinating. He also likes to take into consideration where those instruments originate from and add musical flavors accordingly. Then again, combine those sounds, inspiration, and knowledge with modern technology to create his musical expression.

His release “Ferd” is a proof of his wide range of skills, with magnificent soundscapes and moods.

“Music moves. Music speaks. Music is like a language that expresses things spoken words can not. It is a multi-language that all human beings can understand, no matter what culture, religion, or region you come from. I compose for theatre, movies, and live performances and I also perform on stage both solo and with other projects.“

Astral Synergy Productions have produced a few vocal tracks for his release “Ferd“. On the track “Huldra” you can hear Rúnahild’s ethereal and haunting vocals. On “Ritet” you can hear both Rúnahild and Gustav Holberg (Astralseid). Kjell is also helping us with mastering and as a invaluable consultant when it comes to sound engineering. Gustav and Kjell has also worked together through various other projects such as Ehwaz, Skvalthr, Folket Bortafor Nordavinden and the avantgarde artistic network Origami.